Feel the Intelligence of own physical body on Physical plane , same power have astral body self as physical body. Soul living should be a good Supporter of this guest house and this guest house have seven bodies to work for Soul ( amazing arrangement  ) first four bodies are helping soul to maintain health in stupid wordily affairs . last three are beyond wordily affairs they support to soul for para experiences , they charged they nourished with kind acts , only they get shrink of our against divine acts.

Its a surprising fact our this physical body itself teach us , it has amazing Organs and Intelligent Functioning system , it have own intelligence, own censor, own capacity , own tolerance , own appetite . own Indigestion Indication , own checking system to correct developed Injuries and pains cause of outer givings . ( in separation )

This guest house is already equipped with self staff . The Gust have moral responsibility to take care that property ... that's all ! ... do not try to become Owner of property. it is not your's. even astral body says i am not your's , the other name of astral body is also emotional body .

again surprise this physical working energy and sensor and censor system too , don't be in proud for acquired this Intelligent system , this gift is to entire Creatures who are born on Earth or anywhere according to need .

Live On Earth  with Gratitude for everything , and compassion for others .with little feel of knowing exact what you are  ! and why you are here !


In the theosophical philosophy, our solar system comprises seven concentric planes or fields, consisting of these interpenetrating grades of matter, or velocities of energy. Five of these are directly concerned in the evolution of man; in this lesson the chief attention is given to three—the physical, the emotional or astral, and what is called the lower mental. Man’s perishable bodies are composed of these three grades of matter. The term “ bodies ” is used for convenience, but they should not be thought of as fixed and static; we know .

our physical bodies appear to be the same from day to day, they are constantly changing, although of course at a much slower rate than the others because of the slower velocities involved. The more subtle bodies might be thought of as flowing lines of force which follow generally a certain pattern, modified in each instance by the characteristic thoughts and emotions of the individual, the attitudes he maintains toward life and the world, and the manner in which he reacts to the things that happen to him. They are in reality localized fields of force, or concentrations, in individual foci, of the energies of the larger fields in which they operate. At death, man discards these perishable bodies, one by
one, as he would put by his worn out clothes, to take on new ones when he is ready again to enter the world of objective experience.

For purposes of discussion, we speak of these bodies as separate, terming them physical, astral, and lower mental, but it should be remembered that they are not, and cannot be, really separate. They are interdependent and function as a whole. We know that we never feel emotion without thought, nor do we think without feeling some emotion. And it is well known in medical science that thoughts and emotions affect our physical mechanism and vice versa. While interpenetrating the physical, the astral body is said to extend somewhat beyond it, as the lower mental body interpenetrates both and extends beyond the astral body. These subtle bodies are, of course, beyond the range of our normal vision but are considered nonetheless real. Those who have the faculty of clairvoyant vision have described them, and since these descriptions have a basic similarity, it can be assumed that what the clairvoyants are seeing does indeed exist. 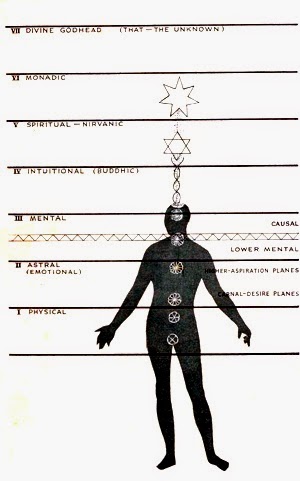 1.  PHYSICAL (Ether)
A.  Dense Physical body composed of solids,
liquids, and gases.
B.  Etheric double, a counterpart of the dense
physical which is composed of the 4
physical ethers. 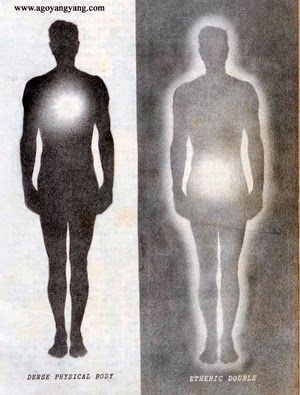 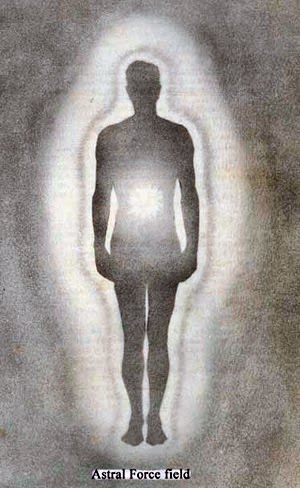 3.  MENTAL (Casual )
A.  The lower mental body which registers
concrete thought.
B.  The higher mental or causal body which
registers abstract thought. 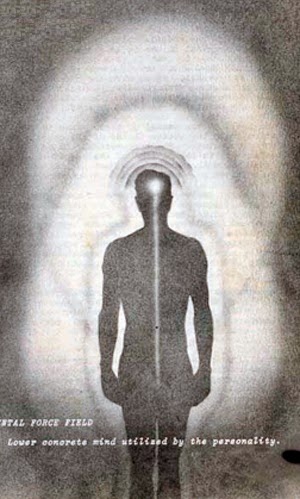 Then there are the four higher, or spiritual principles: 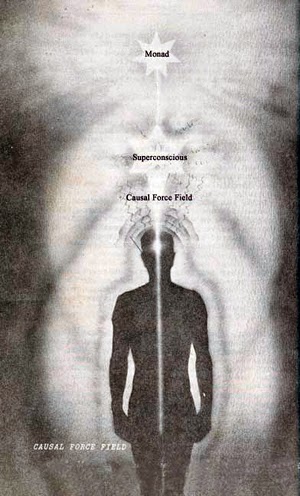 
From that contact point, the nerve force of the soul flows downward through the vagus nerve to the heart chakra where it co-mingles with the blood and is thus carried throughout the arterial network of the entire physical body.  Thus the old adage, "The soul is in the blood," is quite true.
But the soul's principal area of activity is in the head regions and extending upward to the Over-soul in the magnetic field directly over your head.  Thus the causal body of the soul occupies the same force field as does the mental body, since the causal body as the higher mental body, with this important difference: Whereas the mental body has its principal center of activity in the head region and extends downward to the base of the spine, the causal body has its area of activity extending upward to include the Over-soul.

The Silver cord :-The  Silver cord is Invisible  cord, Under imagination One can form any color size and shape , mostly it described as shiny (cause of vitality  and cause of connection it get described as rope ) which is prime  source  of connections  among seven bodies  , first four can feel this connection  with prime austerity, When this “silver cord” breaks and the etheric double is finally withdrawn from the body, vitality ceases to flow and what we call “death” ensues. The etheric double quietly disintegrates in the vicinity of the body, its function for the incarnation being ended.


This is the path of evolution. The rate of progress is up to the individual, depending upon his effectiveness in accumulating right experience and on the measure of control he manages to achieve over his lower bodies, which is to say the true maturity to which he attains in dealing with his life’s lessons. Thus, many births and deaths are necessary for each ego on its aeonic journey toward the goal.

It can readily be seen that these “bodies,” or localized fields of force, are excellent servants but can be tyrannical masters if the individual fails to bring them under control.

The most effective attitude which he can take toward them  is beautifully described in the little theosophical classic.

On the Lotus-Feet of the Prime Source :

“ The body is your animal, the horse upon which you ride. Therefore, you must treat it well, and take good care of it; you must not overwork it, you must feed it properly on pure food and drink only, and keep it strictly clean always, even from the minutest speck of dirt. For without a perfectly clean and healthy body you cannot do the arduous work of preparation, you cannot bear its ceaseless strain. But it must always be you who controls that body, not it that controls you.

“ The astral body has its desires, dozens of them; it wants you to be angry, to say sharp words, to feel jealous, to be greedy for money, to envy other people their possessions, to yield yourself to depression. All these things it wants, and many more, not because it wishes to harm you, but because it likes violent vibrations and likes to change them constantly. But you want none of these things, and therefore you must discriminate between your wants and your body’s.

“ Your The mental body wishes to think itself proudly separate, to think much of itself and little of others. Even when you have turned it away from worldly things, it still tries to calculate for self, to make you think of your own progress instead of thinking of the Master’s work and of helping others. When you meditate, it will try to make you think of many different things it wants instead of the one thing which you want. You are not this mind, but it is yours to use; so here again discrimination is necessary. You must watch unceasingly, or you will fail. The attached diagram III may be helpful in studying this lesson. It shows in symbolic form the different planes or fields of force, including the densest ones in which man appears. It should be remembered that these are interpenet rating states of matter


therefore this diagrams should not be taken literally; the different
planes are shown separately with the densest at the bottom for
simplification in studying them, but they are all closely related and interrelated.
The word “atomic” is used to designate the highest sub-plane of each
plane and refers in occult literature to the basic matter of each plane. It should
not be confused with the meaning of the word “atom” as used in physical
science.

(a little thoughtful homework for self and believe it either you find anwer in write or not all answer you have within ) :

1. What is the relationship of your body to yourself?

2. What is the purpose for having material forms?

3. Briefly describe to self the emotional and mental bodies of man.

4. What is the etheric double? What is its function? Is it a true body?

5. Explain the significance of color in thought and feeling, and indicate the
meanings of some of the colors.

6. Explain why the bodies seem to tempt the ego to give way to
undesirable thoughts, desires and actions.

7. What should be a person’s attitude toward his bodies?
Posted by lata at 20:46