A Letter to Soul to Soul ( religion of terror ) 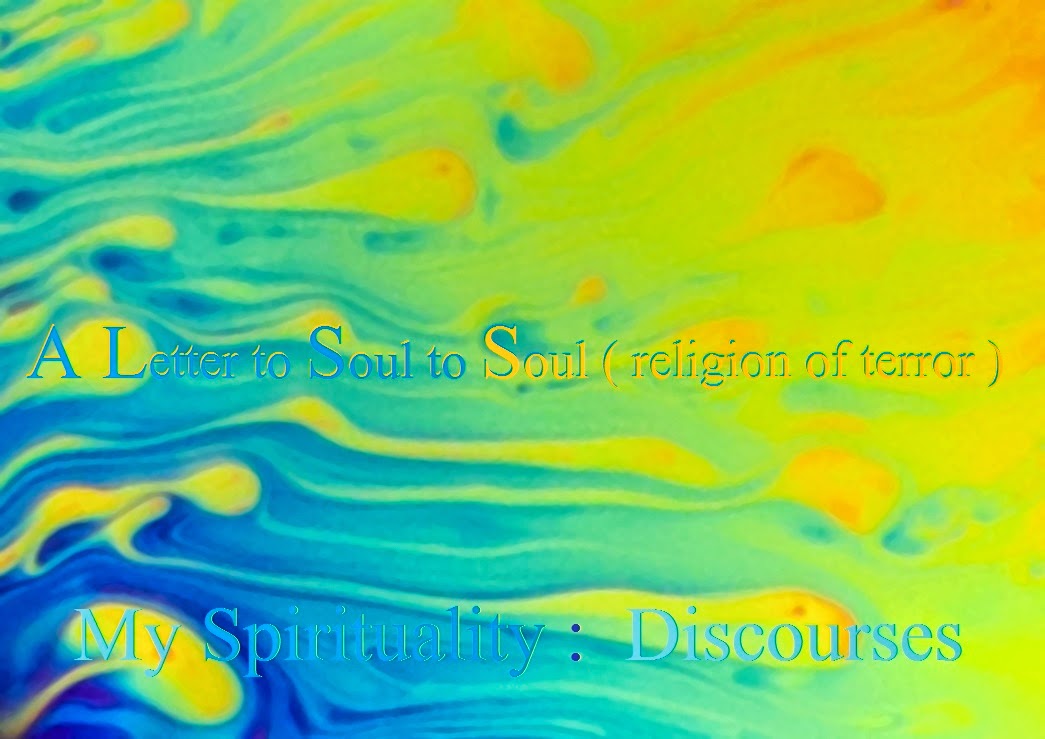 Cos ; you are restricted in body , in limits of everything , besides of restrictions you are busy to spread love is everywhere in the form of meditation and in the form of reiki , your wisdom can not be restricted to only area or one nationality , you are above of nationality ... you know ! as they bloodsuckers are , they have no any nationality , no any religion other than Terror , they do not even know the kind of love is your part of life . their love only towards terror so that they involve only to give birth of another terror-tale ,the only reason they use womanhood for by hook or by crook or they give them death penalty , their love is only Bombs and Human - Blood in this hunger / thirst ; relation , age and sex is no criteria . ( its shame part of them but it is comes under their growing terror populations ), they are so smart , they know real religion can not accept them so they they create own forceful religion Under Jehadi-tale , they take those all tips from Religion .. like they allow religiously many marriages with no restriction of any cast or any relation , they appreciated by their group for uncounted birth-rate , this law is exist only in " Islam culture " and old Islamic-Grass-roots In those areas . , this is also surprising they find most adoption from Islam (!) with the declaration One day they will get all their Ancestor,s lost sovereignty from entire world ... ( thinking what goes if oldest religion of world starts to ask about their existence ! cos Muslim growth is in middle of Era ). means, their declared-mission is big n bloody , with all Islamic religious laws which in Favors of them ...

( just for  reference  want to add muslim growth history pic , with the word  Nature and time need  growth   for change and developments .. with acceptance of present developments .. as we can not get back  Vadic Indian Golden Age , we can not make  India  as 100 % Hindu Oriented  Kingdom , these thoughts  are artificial and  propagated  by political minds .. but yes we can do  best at  our own limit  we can  adopt all goodness of our  culture  and leave mud , this is development ...  as  every  big mind  think  on same  pattern  for example ;   Sidharth  was much before from  Jesus  but his preaching adopted  by Jesus... because they were up from sattled  mental mud of Society ...  they visited in those area Including  India and Other places  to adoppet  and to give encouragments to take good from all religions ... he was  flexible  though basically  he was Jews and  In The Qurʼan mentions the names of numerous figures considered prophets in Islam, including  Adam,  Noah,  Abraham,  Moses  and  Jesus , among others ... Muslims believe that God finally sent Muhammad as the last prophet (Seal of the Prophets) to convey the divine message to the whole world (to sum up and to finalize the word of God). In Islam, the "normative" example of Muhammad's life is called the Sunnah (literally "trodden path"). now see the pic below with wise thoughts :-

Readers  may find  here clearly the whole span of growth and developments  of Muslim Religion till today  , it is not Islamic Tale  every religion have own history growth and  downing , but  here is something  Satire  which is not in another  religion practically , i am not saying  about  what real  dharma is saying , cos real dharma is  not squeezed and narrowing from any one casts-ism   it is much bigger  and most is  same  in base  of every religion -

.( O'  , one thing is  noticeable ; Touch-wood there is nothing to learn to terrorists  from the christians which are sub-root of Jews as muslim itself are ,next the hindus and  sub-root of hindus the budhha and jain or sikhh religion and the other religion .. Cos they have option of long-spreadsheet to learn from any religion but they pic points only from Islam !! this is separate issue "few" sensitive muslims starts to say those terrorists are not real muslims... but when ! at-least good to all ; with this one thing get more good if those sensitive and good hearts may check religious loopholes from where these tendencies are getting strength to grow ) with their tendency to win wars and grow population only with no respect of human being and no relation or effort regarding Social , Individual and Science developments , basically ; they are parasite and user of all developments and economics given by you to humanity by your kind sacrifices in past .

Dear Soul , they are true heartless and mentally challenged tuned puppet , can say mechanical clone . So what ! you have another heights of love and lives . though there is no comparison.... true ! but wisdom should be there , while thinking wise . Come out from any nationality any area any religion and get unite ( is it dream , for you ! ), though you are more powerful, get collect unitedly as whole universe is you only , not divided here n there .

Do you know history what says ! divided get weaker , and United get stronger ... that time in History when Chankya unite the small divided areas and its converted into Big Unbroken Area ..

In the little more broader spectrum entire souls are divided in to two groups on Earth .. here is , * one based on religion of love and * other is based on religion of terror . its wide earthy division of religion among devil and deity as on today also applicable ... but hard luck is this soft love religion is further divided upon other pieces of religion .. so that Love  appears weaker ...

Under One Mission to spread awareness  to spread  One love for Abundance  Peace  and Development , Are you able to collect world-over unitedly ! though you are late in application  but  not out of time ....... are you able to contribute  where  few enlightened  were and are involve aggressively ... to show light in dark

benefits of love message ! appreciation of love living !and with  the purpose of life !