The Kach ; hero of  story  was an ancient sage and the son of Brihaspati in Hindu mythology. The narrative of Kacha is mentioned in the Mahābhārata, the Matsya Purana and the Agni Purana. He was sent by his father Brihaspati to learn the secret of the Sanjivani mantra (a hymn for reviving the dead) from Shukracharya, the guru of the Asuras. The idea was to help the Devas with the knowledge of this secret. Its a very symbolic  story of  strategy , politics , and   many more things  about  basic nature of between   Deity ---- Human ----  Devil's .  Guru Shukrachrya  was well known  Guru of devils , very brilliant  , had knowledge  how to give re-life , after  get dead of body . and  for reason  deity  do not have this knowledge , their loss means loss , and human  were more weaker joint  of this chain . than   Indr  planned  to send kachh  to learn this knowledge to shukracharya as student .  Devils were known and they want to kill kachh , but  shukracharya take responsibility of kachh  protection  with in ashram premises . Devyani  the daughter of Shukracharya , get attracted towards Kachh , it was not under knowing of kachh  for many years  he was  totally concentrated  towards  the Mission of MritSanjeevani   knowledge to acquire , so  that they  serves this knowledge to entire  three loka's well-being  which is  till only authority of devils .

it is shows  also  very healthy long  span  of learning  of  mratyu sanjeevni Vidya to  kachh  from Guru Shukracharya  that to not of guru  knowing  total task was  big secret  from deities  and reason behind was well-being of total humanity , This is recorded in history  The Very First  Secret Task  Mission takes two times life of  kachh and  it  get  covers 1000 years approx. to  learn  secretively complete learning . and final result , and in History of Epic  he get established  as  first  successful  Secret Agent 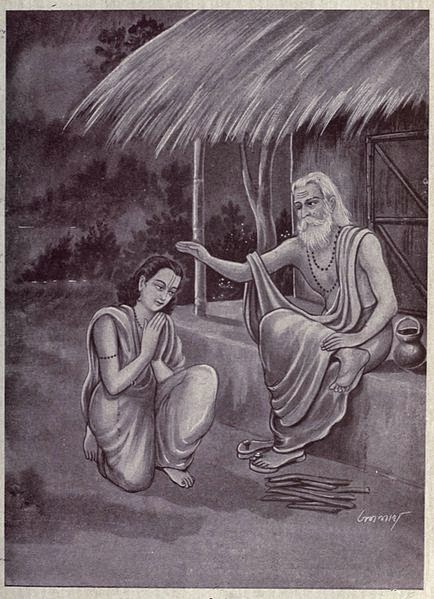 
Devayani was the beautiful daughter of Shukracharya, preceptor of the Asuras, the Demons.Shukracharya knew the secret of Mritasanjivani that brings back to life the Asuras , killed in the war with the Devas, the Gods.

The Devas and the Asuras fought all the time for the lordship of the three worlds.The Asuras were care free and happy  because their preceptor Shukracharya knew the secret of Mritasanjivani.

The obedient and dutiful Kacha set out to meet Shukracharya.He presented himself , introduced as the son of Brihaspati and sought to become  Shukracharya's disciple.
Shukracharya was a true teacher and so could recognise the brilliance of Kacha.He warmly welcomed him and accepted him as a disciple.

Shukracharya introduced Kacha to Devayani as Kacha had vowed to be Shukracharya's student till the period of study was over.Kacha started living with the family of Shukracharya as per the tradition.

Kacha developed a liking for Devayani and she was also drawn towards Kacha.
As the years passed, The Asuras became suspicious of Kacha.They wanted to get rid of him
One day as Kacha was attending to the cattle of Shukracharya, the Asuras fell over Kacha and slew him.To the great relief of Devayani,Kacha was brought back to life by Shukracharya.

The love between Kacha and Devayani grew day by day.

The Asuras were worried as they could guess that Kacha was there to learn the secret of Mritasanjivani.

One day Devayani asked Kacha to bring a particular flower that grew in deep forest.The Asuras followed Kacha and killed him once again.This time his body was ground into a paste and dissolved in the water of the ocean.

Shukracharya once again saved Kacha by his secret knowledge.

The Asuras were puzzled as each time they killed Kacha he was saved by Shukracharya.
They got the idea from their senior to kill Kacha.So next day when Kacha went out with the cattle they slew him again. This time they burnt his body, took the ashes, mixed with wine and offered it to Shukracharya.Shukracharya had a great weakness for wine , so he drank it, blessing the Asuras.

Devayani knew what had happened by seeing the cattle return home without Kacha.Seeing Devayani's plight as she was in great agony, Shukracharya used his secret knowledge and called upon Kacha to come back to life .Kacha came back to life and spoke from inside the stomach of Shukracharya.Shukracharya cursed himself for drinking the wine given by the Asuras.He told that henceforth wine shall be forbidden for those engaged in spiritual pursuit.
Shukracharya was in real dilemma. He could ask Kacha to come out but that would mean his own death. After long deliberation Shukracharya thought a way out.He knew now the real purpose of Kacha's visit.He told Kacha that there was only one way by which both of them can ensure Devayani's happiness.Shukracharya taught him the craft of Mritasanjivani.Kacha emerged from the  dying body of Shukracharya and immediately brought his Guru back to life.

When the Asuras came to offer wine to Shukracharya, he shouted," You fools, Kacha now knows my secret.But rest assured Kacha will continue to live with me because of the love for Devayani."

But Shukracharya was sadly disappointed when he learnt that although  Kacha deeply loved Devayani,  he has to fulfil his duties towards the Devas.

On the last day of his studies Kacha went to Shukracharya for his blessings.Devayani waited for Kacha to propose marriage.Devayani pleaded Kacha to take her as his wife. But Kacha replied, " I was born from your father's stomach.I am, therefore ,your brother.I can't marry you."

The heart- broken Devayani accused Kacha of using her to attain his goal.Devayani cursed Kacha, " You will never be able to use the craft of Mritasanjivani to save yourself."
Kacha replied,"Devayani it is wrong to curse me as I have saved your father.There is no doubt that my love was sincere and faithful.But I have my duty to perform towards my people. Because of your unfairness , I am cursing you that no Rishi's son will ever marry you.I may still teach the craft of Mritasanjivani to others even though I may not be able to use it to myself."

Saying that Kacha departed for the abode of Indra, King of the Devas. With the passage of time Devayani completely forgot Kacha. She got married to Yayati, a Kshatriya later.
Posted by lata at 01:04