Its easy to understand  Mooladhar (if energy not moving up) is rooted on planet Earth with activation to help of prakrati  named Lives  is the  cosmic sense  of Shive linga or  Shiva  the  Lord  Supreme  ,

In more broader term  Shivlinga  is  very center  of cosmos  and rooted  with surrounded  galaxies  as  base  of manifestation .

Aaah !!  what a beautiful scene 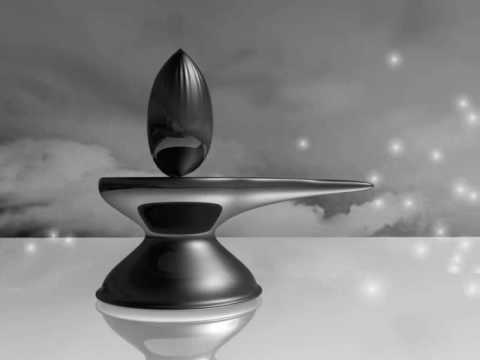 contemporary popular meaning of Shivlinga is the Other deep meaning is " The black stone and Oval Shivlinga is symbolism of Seed of manifestation rooted on Earth , meaning as "Very center of Source"

It was a bit shocked to read several articles on Shiva and Shiva lingam in THE WEEK dated 6th May 2012— absolute nonsense.But then the owner and the Managing Editor is a Christian and he has vested interest in choosing Hindu writers who will repeat Vatican’s contention that a Shiva lingam is his erect penis and the inset is a dripping vagina ( peetham ) . though  nothing is wrong  in the sense  not trap under argue of right and wrong ,  actually  this meaning also symbolic  of that bigger meaning  itself .   In the eye of Yogi  the one thread is only of right .  though wrong  world is  perceptual and not  in existence .
LINGAM  in Sanskrit and Malayalam means sign / mark / inference / symbol / gender / time scale. Bhootalingam means past tense. Bhavilingam means future. Napunsaka lingam means neutral gender in Sanskrit and Malayalam.

The center dot is the Bindu or Singularity from which the big bang took place to create this egg shaped ever expanding elliptical cosmos. The Shiva Lingam is elliptical in shape –like an egg.The vagina ( sic ! ) is the " event horizon ", which is well known by quantum physicists. Singularity is the point at which the time space curvature becomes infinite. Even Albert Einstein did NOT understand that without Singularity you cannot have a expanding Big Bang.

Eventually prior of temple making , while roaming here n there Sages find this shaped Natural black stones , there they established A Sidhhpeeth ( सिध्हपीठ ) with all purity they find as Divine Indication of their Presence . So that All religious established sidhhpeeth have a very natural stone in the place of structured God 's statues .

Below Sahasralinga, Sirsi, A place in western ghats known for Shiv Linga. It is on the bank of river Shalmala. The river is surrounded by lush green forests.The place is quite secluded, except during “Maha Shivratri” celebrations when it receives a sizeable number of pilgrims from the surrounding areas.

As per history, all these shiva lingas were built by Sadashivaraya,king of Sirsi (1678-1718). You can found various figures been build over it like Basava/bulls (carved in front of the shivalingas), saints, people doing puja and archana, Lord of Snakes etc. The stream is full of thousands of Shivlinga of different sizes and shapes scattered all around. This aspect of the place makes it a cool place to chill out for both pilgrims and nature lovers.

Below is pic of Cosmos  in very center is our sages seen  Black  and oval  passage , it is  Cosmos  is look like base  and  very center is look like Linga .  The  basic concept of Adi Shiva-Lingam . where is root of  very productions ( galaxies  planets and lives ) are available in seed form and on that era , when Hinduism was going to root  and taking shape in  Society. where Sages  find  Natural shaped stones  they established  Sidhhpeeth / relgious temples there. Over the period of time in development , village  and  city took shape .

Below some thing out of myth  about Shivlinga  and Ma sati  and  his and her  established temples , try to keep you away  from any myth , Lord Shiva  Undivided  and  settled in very center of Cosmos .

As One Puranik Story :-
In that stage , where black cosmos look like Shiva_linga ; is the very " symbol " of Prime Source " Named " Shiva ( detail described prior) and on that stage where prime Source is United and One , there is no prime split as shiva and shakti . Shiva later further split in Shankar ( as trinity ) and Shakti become Sati later in next life she get Parvati , in the Sati body She divided in pieces further after offer herself to pure fire in parents house and Shankar took him on his arms moving here n there , in that time her body part where fell down there One shidhhpeeth get established , among many body parts the Yoni is fell in one hill on Assam , there temple developed and named "Kamakhya" (Mooladhar).
In entire description of Ma Sati , Kamakhya Devi is tiny part of whole body of Ma Shakti . And basically Kamakhya is famous for Aghories , Tantriks , she is favorite as Sadhna spot to gain magical powers. as in Calcutta Famous temple of Ma Kali is also famous for Boon of Magical powers . and i heard when god gives any power to human . there must be some left to suffer . otherwise Main Source is Undivided , United , Simple and Beautiful . so be careful while claiming  of magical powers .

Is Social Awareness must about right Religion, right knowledge , right path and right following of right guru Under , be set in very center towards very center of Universe " Under full respect and regards of the principal of Budhhas last preaching " Appo Guru Aapo Bhavah " .