With  many  uncounted  Factors  of Improvement area of human minds  one is  running for fulfillment , what !   where ! and how much ! even not find answers  still if room is there fulfilling  is on boom .

Only Prayers on this  human psychological aspect, no one can do  more  , only self awakening  can do wonder for self

finding ; 99 % mindful emptiness always in search and always room for perfection with uneasiness ..... its basic of earth-birth , its kind a blessing that something scope is for effort , problem is ; Ocean waves not stopped despite true effort swipe waves back in Ocean feeling of emptiness feeling of scope always present and this is also a nature part . no matter how much you touch the peak point of goodness , the peak point of best in professionally / personally .. the room is attached .the reason feeling of thirsty is also present for those who are believe in efforts . the reason is simple if you work for filling in some area the counter part of emptiness / hollowness also attached . So that , no matter how gifts one have in self bag , always feels room for collection more more more .. (the collection quality may be material of it may be emotional )

This also true  tendencies   are  nature product , you can not fight of removal .. fighting  against is a  kind of madman act .The only feeling of acceptance surrender and gratitude gives ultimate inner-satisfaction .. provides amazing balance .. if you are some how feels unfilled your second part is also shows halftones  , if you fulfilled your counter part also filled . and your counter-part not physical your counterpart is your own Soul and her satisfaction . This is Simplest  Spiritual living Mantra .

* * Make  a ground  for  acceptance  vast before in jump in vast :- Essential  Spiritual feeling  gives new dimension to awakening ,  to find self  with spirituality make   fertile ground  of acceptance of bigger truth , here meditation play smart role .. very first meditation grow  sensitivities in positive  manner  and kills  all negatives , after that  chakra system get clear and  wisdom touches  highs  through sahastrardh-lotus-opening , now  sahastr opening simply mean here  your connectivity  now  healthy possible  with Vyom and you are find connectivity  with stars ..  non of other mean  of this chakra .

Now  comes  on main title point :-  very much  curious  question lives in everybody mind under what and why and how long ! specially in birth and life - death  term .. question may arise  many  flows  of  what is life , and why  only we are  in situation (good or bad) question may also comes  how much long  rebirth (if)  process will continue , and  how much long  this cycle have .

And Good part is all answers you already have within .. only  all they have in sleepy mode . cos when knowing comes on awareness ground  most things  you find yes i know !  and after that one curtain appears  and  answer get blur . means  to know  actual answer is behind curtain . In duality  One can not able to hear that answers .

Now  what  our knowing  which is able to hear by wise  , i am sharing here , let's come bit-off with Science .. everyone knows about time  and  time bounding s , you day start with time !  your mind  receives  time divisions .....  so just do  your time area bigger , as bigger that you can do embrace  the Vyom  and his routine  time frame , you are much aware  about planetary Orbits  rotations and  their various effects  upon living and nonliving things . they also known  under subject of  Astrology and Astronomy ..  here need to focus on main subject is Important  those planets relation is  with us of magnetism  and gravity , gravity is a  physical element . which is attracted  with magnet . Through Science  and Scientist  every one knows about certain proves of  mysterious Vyom .. under this knowing everyone also knows  Bigger time frame and distances  of  galaxies  and we are  very tiny product  upon Earth  which is already tiny in the front of other bigger and powerful Stars ..  and each meteor is rotation  on round orbit  of  origin Star ...  Earth is also  a meteor of Sun  and earth 's meteor is moon .  this is very  compressed  start of knowledge with Scientific prove of mysterious  Sky .

the below picture try to explain  Orbits  in time frame 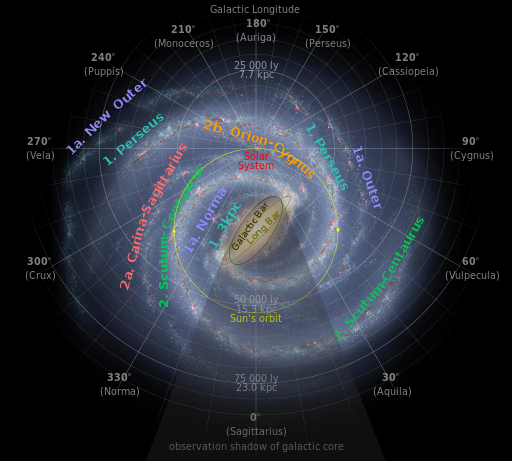 The galactic year, also known as a cosmic year, is the duration of time required for the Solar System to orbit once around the center of the Milky Way Galaxy. Estimates of the length of one orbit range from 225 to 250 million terrestrial years.The Solar System is traveling at an average speed of 828,000 km/h (230 km/s) or 514,000 mph (143 mi/s) within its trajectory around the galactic center, which is about one 1300th of the speed of light—a speed at which an object could circumnavigate the Earth's equator in 2 minutes and 54 seconds.
The galactic year provides a conveniently usable unit for depicting cosmic and gcrimination between geologic events, and a "million-year" scale requires some rather large numbereological time periods together. By contrast, a "billion-year" scale does not allow for useful diss
Below Chart is Timeline of universe's and earth's history in galactic years
The following list assumes that 1 galactic year is 225 million years.
Below Visualization of the orbit of the Sun (yellow dot and white curve) around the Galactic Centre (GC) in the last galactic year. The red dots correspond to the positions of the stars studied by the European Southern Observatory in a monitoring programme

And after going above mathematical calculation  please listen carefully ,below  this video .. what  wise says ..  during churning  listen  , absorb  needful  and  rest  is leave .

Sadhguru looks at how the human system can be influenced by the solar and lunar cycles. He speaks of how once a person lives through 1008 lunar cycles, an individual’s bond with the planet is largely broken, and with very little assistance, such an individual can go beyond the cycles of birth and death.

And  you will find your  all answers , if you listen proper and read well  all  definitely you will have answer in end (Y) tha is i am sure , cos i  have all answers  in my hand after  go through .. if not read again !  and listen again .

wise says  if you are nothing doing towards  soul enhancement no problem , if you are  not evolve  in austerity , no problem , cos you are doing nothing !  if you are thinking you are doing something  you are in big illusion !  actually you are nature bond product ! nature travelling in her time frame . and you are in flow .  don't find bigger  self !   after 7   Solar Year  your gravitation self get  finish  and  your wisdom get arise  as energy ...  if  today you are not find yourself  wise  as  on  planetary chart , it means  only you are too young  for forces ,,,you may see it in kids .. kids have so much " energy " , same in front of forces  you are young !  when  maturity will come all wisdom appears automatic.

Now  this  Big sentence  again reminds me  " In front of lord we are kids ; those  do not know what they are doing , they are sleepy .. not awake yet . "

** Now the figure  of seven births  are different in the term of Divine Forces and for our small astrology  chart (though itself big ) inspired  with vast system .. so that  though energy is same in subject  but productivity  is much less  in the field of vast , our chart  and birth cycle is based  upon solar system  which is framed on earth running on sun orbit is 24 hrs ,   though we are also a part of Solar Year .. our roots are there in galaxies  .  so that our attractions also guided with them .

very vast  to think to churn with   small minds  which is born with small spark of energy and product of Earth ..