The Temple Of Goddess is in Devotee's  Heart

Its  very simple  to understand , the world  is  divided  in two  powers  masculine  and feminine , one is  cause of production  and another  is cos or  creation in womb . So that In duality  this concept comes  to worship  power , If we starts our mindful journey  from one  Source  of Energy  Popular  name  in Hinduism that is ,' The lord  Shiva  is  main source of entire  creation  without division .  the  very first division appears  when Shiva  divided himself  in three parts  of Trinity . Brahma , Vishnu , Mahesh (shankar).  further  we find  cause  to run Maaya  Shiva  divided  himself  in duality  , that is Adi  Shiva  and Adi shakti . and Trinity  also divided  their  powers  in Duality  as Bramha + Brahmani (cause of creation ), Vishnu + Laxmi ( cause of preserver  and cause of wealth ) , Shankar + Parvati / Sati . ( lord shiva / shankar / mahesh / are the cause of destroyer ) , and  amazing part is Lord  Shankar and  Ma Parvati has full family  of sons and daughter . and  they are Originally known as  very  prime source of energy Ma Adi Shakti (she is sati  she is parvati ) and Lord Shiva  as very first  basic division  even before Trinity division

There  are  loads of description and stories available  of  further  avatars  of God and Goddesses  for different causes  on different time frame , its a long and descriptive , some how  it is not  subject  so we have to come out in short briefing  .


" Beneath the veil of the Goddess is a wealth of feminine knowledge that has been lost, or forbidden, to women and the world. Knowledge is power, and learning of Goddess lore will empower women through knowledge of their ancient roots. The tapestry of the Goddess is richly woven with golden threads of rediscovered women’s art, history, cultural heritage, and folklore.

The world of the twenty-first century is out of balance. It is a world diseased by fear, hate, war, greed, violence, and all the subtle and obvious manifestations of suppression and subjugation of nature and the peoples of the world. These destructive aspects of human expression are typically considered the shadow aspects of the masculine: power not in service to the life force. It is our belief that what is needed to restore the essential balance of humanity and the planet is the life-enhancing aspects of the feminine: equality, reciprocity, and caring, to name a few. The Goddess is the pure, undiluted essence of femininity, the homeopathic cure for what ails us.

The spiritual beliefs of Temple of the Goddess are not meant to invalidate others but, we hope, serve as an affirmation of the inclusiveness of all beliefs. Just as a loving mother honors, celebrates, and respects the differences in all her children, we believe the Divine, by whatever name she/he is called, embraces the life-affirming spiritual beliefs of all humanity. " ( from Temple of Goddess )

As every one knows  Maa Shakti is  "symbol " Power of womanhood .  But Why it is so much need reminders ! cos this term including worship of Maa designed and politically used in practical in men's world .
Amazing temple worship rituals , Goddess is respected and worshiped there in many ways and in home in society this power get crushed with several social reasons .

Its difficult for goddess too , to take place in temples and worshiped by Tantrik is she not opted " 9 Avtar of power pack " in 9 days Kali avtar more significance in tantr sadhna , and Maa Kali and maa Kamakhya are famous for in Tantrik mission ...... , but in my point of view if Maa blessed anyone with black power means she want to punish that soul .... So be simple , that is Maa's  true nature , and nature attracts nature (its a natural law)
Just think ! why ! cos man need more mystic power , hunger of power get mold to men to do worship of Maa ! same with Lord shiv . thinking ; if Lord Shiva and Maa Shakti gives drop of power to human as fruit of Sadhna , man get mad and ego starts dancing . the time is even to get power do not lose gratitude compassion and love . cos these three are base. to leave these means you are ready to leave earth where you stands .

9 days are not just 9 days , these could be 9 systematic steps in attainment of power , , it may be 9 days in attainments or it may symbol of 9 human births ...

As you wish to understand this power and attainment process , take Essence of Maa Shakti .

Basic is do not trap in following mechanically under wordily desires , give place to this power in center of heart just merged it with power of lord . ( though they are one already, but you have to do by own )

May Ma bless to everyone wisdom and wishful thinking in these Nava+Ratri ..

.
Major These nine nights celebrate the Divine Feminine, and are a time of great festivity in India called Navratri  its get celebrate  different part of India  in different ways , in some  part of India  Maa get worshiped  in form of Kali for  black magic .

Navratri  comes under three major division of  three Gunas  first three are  * Tamas  then next three are * Rajas and last three are known  as  * Satwik  or  Satoguna .

It is  the beautiful Journey  of through Maa Shakti of austerity / attainment  gradually  but steady and firmly .

Sadhguru: " In yoga, all the qualities of the world have been identified as three basic gunas: tamas, rajas, and sattva.  The nine days of Navratri are classified as per the three basic qualities of tamas, rajas and sattva. The first three days are tamas, where the goddess is fierce, like Durga and Kali. The next three days are Lakshmi-related — gentle but materially oriented goddesses. These goddesses represent rajas. The last three days are dedicated to Saraswati, which is sattva. It is related to knowledge and enlightenment.

Lets see below  the journey  of Austerity  through  Guna and victory on Eternal Internal  ....
in  Tamas  guna  Maa more connected  with wordily feelings  and emotions as guru says ..

Day One she is  : Shailputri :- Dedicated the day to A responsible Sweet little playful Daughter .

Day Two she is : Brahmcharini :- Dedicated to all those are in process to collect Intellect and attainments .

Day Three  she is :  Chandrghanta : Wisdom Moon is placed on her head, her development Moon Headed on her Head. Moon is cause of Inner calmness and stability  and emotionally uncontrolled energy also , the moon placed on head means , controlled by mind now not by heart !

In Rajas Guna  Maa is  flowing the path towards  austerity  :- Days four to six of Navaratri represent the quality of Rajas, which means activity and passion.

Day four she is  - Kushmanda :-  Her name comprises of “Ku-shm-anda” meaning “the cosmic egg.”  she is in calm and in peace Beautifully wearing  red sari  and Ornaments with  all inner serenity and power ... In Sanskrit, “Kushmand” means pumpkin and Devi Kushmanda liked the sacrifice of pumpkin and hence this is the other reason that she is addressed with the name of Kushmanda. it is said that the Devi Kushmanda formed the universe in the shape of an egg with her little divine smile like a flower which blossomed with a bud,
Day  five she is - Skandmata :- she is A Mother , she is protector , she is creator . Great Motherhood , she have a son in lap with all previous attained qualities ...with green moon headed (green color is symbol of earth and peace )
Day Six she is - Maa Katyayani :- she is get strong equipped with all weapons of strength

Day Seven she is - Maa Kali :- she is powerful to protect her and her beloved (if needed ) .
Day Eight  she is  - Maa Gauri :- she is again in peace and blissful posture Jai Maa Adi Shakti , Ma Gauri , cool like Moon , Calm , compassionate and blessing giving in posture , Musical instrument in her hand .. vehicle is Nandi .... Nandi , who is devoted all basic stubborn tendency on shiv's feet so maa vehicle is strong but devoted Nandi is , it self maa is full on power acquiring real essence of power is " Wise Calm and Strong " and weapon in her hand are Damaru , Trishul and Saree is white . means here Shiva also allow merged slowly him in Maa,s energy ...
Day Nine  she is - Maa Sidhidatri :- Wonderful posture in Giving only .... 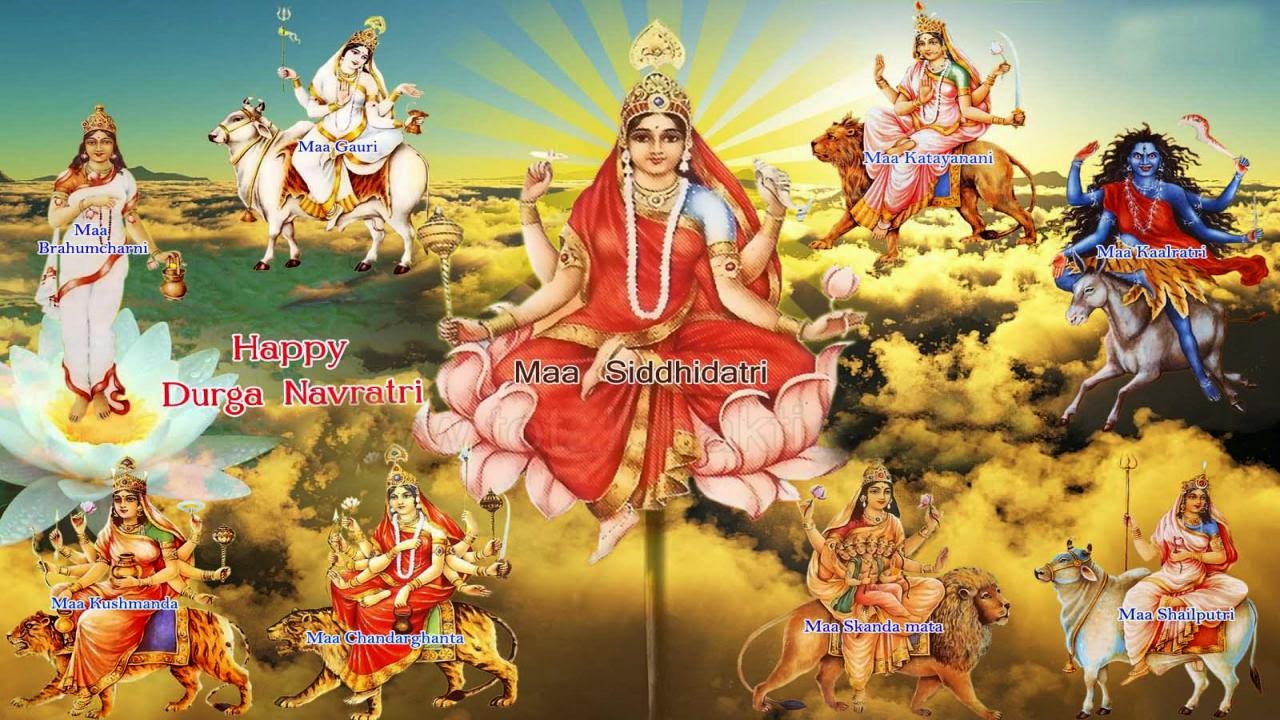 The Journey of Nav Durga !!