Origin of Totashtakam : Story And Verses with Vedio

The four Disciples of Shankaracharya 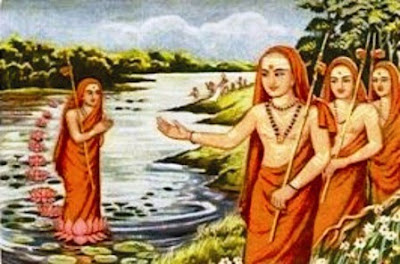 Padmapada, literally meaning the one with the Lotus feet. Adi Shankara was traveling and they set up camp at a beautiful lake. Padmapada was foraging on the opposite bank of the lake, when suddenly the Guru called him… So intense was Padmapada’s love and devotion to His Guru, that he just ran across the lake on the water to where his Guru was… It is said that wherever Padmapada’s feet touched the water, a Lotus sprang up to support him. And hence he got the name Padmapada.

Vishnu, the boy who accompanies Shankara at Narmada, and is assumed to be dead by him by drowning, meets him again at Kashi and is taken as a disciple. Vishnu is named Padmapada by Shankara.
To be like Padmapada means to walk delicately, tread lightly on the planet. Be ever cheerful.
Hasta Malaka, was the guy who was extremely skillful in doing work. Literally it means the one who does stuff as easily as holding an amala (goose berry) in his hands. He had never said a word to his parents, and when he met Adi Shankara, the story goes, that he chanted out the Hasta Malaka Stotram, which in just a few verses talk about the subime Advaita philosophy. His parents were shocked to see how the Knowledge came from this little child who had never uttered a word since birth. 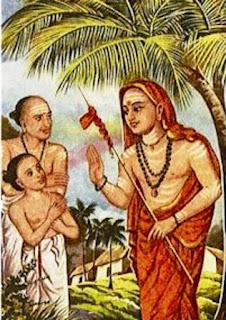 Adi Shankara explained that once when the child was very small, the mother had taken him to the river to bathe, somehow the child toppled into the water and drowned… a Rishi who happened to be there witnessed this, and his heart went out for the sadness the parents would feel, so he left his own body and entered the dead child’s body, bringing into the child all his years of meditation and all the Wisdom of the Knowledge He had… To be like Hasta Malaka is to be adept, so adept that any work given feels as if its as simple as holding an amala in your hands.
In another scene, Shankara observes a boy, who is thought to be a lunatic by his parents. It is clear that Shankara knows the truth about the boy being an Atma-j~nAnI. Shankara asks the boy "Who are you? Where are you coming from?". The boy replies "All pervading, yet unpolluted I am Atman," and is taken as disciple by Shankara and named as Hastamalaka (hasta = hand; Amalaka = myrobalan fruit) [He can perceive the eternal truth of Self, without effort.].

Sri Sankara Giri / Trotakacharya was the dullard. He was least interested in Knowledge and Spirituality. But he loved the Guru and wanted to do everything he could for him. He was intensely in devotion and Seva of the Guru. However, He usually snored through the Guru’s discourses. Adi Shankara loved him even so…
One day all the disciples had gathered together to hear the Guru talk, and as usual Trotakacharya was washing the clothes, cooking food, fetching water or doing some mundane task… Adi Shankara refused to talk without him being there, much to the chagrin of the other disciples, who grumbled among each other about the futility of waiting for him… He anyways sleeps through all the discourses, why does the Guru wait for him to begin?! 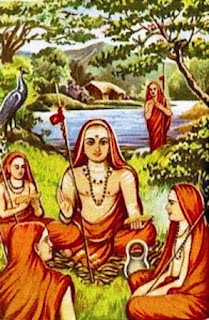 Suddenly they heard him coming, whistling and singing a song… The song expounded the Knowledge in a deep and profound way and was being sung to one of the toughest meters… They all listened astounded, marveling at the beauty of the song … as the simple minded (?!) Trotakacharya made his way to the Guru’s feet…and  born Trotaka-Ashtakam . Sri Sankara, Giri, while listening to the discourses never asked anything. Disciples thought that Giri was a dumb idiot and did not know anything. One day, on Shravan Shukla Saptami, 2653, i.e. 11 Jul 488 B.C., Sri Sankara was waiting for Giri to arrive. Ultimately, Giri turned up and burst forth into eight slokas which had never been heard by the disciples earlier. These were the creation of Giri. These slokas are called "Trotaka ashtakam". Giri was named as Trotak by Sri Sankara.

Shankara is redirected by Kumarila to Mandana Mishra, a great scholar in Poorva Mimansa which puts emphasis on rituals, rather than renunciation leading to knowledge of Reality and Truth. Shankara defeats Mandana Mishra in a debate, takes him as disciple, and names him Sureshwara.